Images of silver-haired couples, vacationing and enjoying a spectacular sunset are everywhere. Advertisers use them because it depicts something that many people profess to admire: the successful navigation through life with a partner you love.

Sustaining good health is obviously foundational to achieving that goal, and with advances in medicine and healthcare, the prospects for a long life are better now than at any time in history. That’s the good news. But there’s a flipside to the pervasive images of well-retired couples, an image that is common yet rarely seen. What happens when one of those photogenic partners passes away, or what if you never had a partner to begin with?

Studies show that women live an average of 5 years longer than men. And that 5 year window is a part of the reason why women (and their partners) need to take a unique approach to retirement. Because not only does living longer mean needing your money to last longer, but because retirement for women is decidedly different than it is for men, with gender-specific saving habits, unique healthcare costs and disparate expectations for income, the simple fact is that women, whether in a partnership or on their own, require more money and more retirement planning than their male counterparts.

Reasons why women tend to have less in retirement, but need more

According to the US Census Bureau, the poverty rate for women age 65 and older is 16 percent, compared to just 9 percent for men. While 37 percent of American women between the ages of 65 and 75 live on their own, that number jumps to almost half of all women (47 percent) once they pass 75. Simply, if you are female, even if you are married, the odds are high that you will spend 5, 10, or even 15 years on your own.

But why does a longer lifespan equate to higher rates of poverty? It’s partly about what women are doing differently than men. First, there’s the impact of major life events. Whether it’s cultural, biological, or a combination of both, women are still the most likely of the sexes to take time off from work to raise a child or to care for an ailing spouse, parent, or other family member. This affects both savings and earnings potential. That’s because when work is interrupted beyond normal sick or maternity leave, not only does your income freeze but the flow of money into retirement accounts stops, as well. Further down the line, time off from work increases the likelihood of being passed over for promotions, or may move you to the front of the line in the event of a downturn or corporate restructuring.

Another reason that women have less money for retirement (and are more likely to end up in poverty) has been attributed to the differences between the negotiating styles of males and females. While the statistics support the fact that women get paid less than men, one reason for this disparity might be due to gender-differences in salary negotiation. According to an April 2014 University of Texas study of 1200 female job applicants, women asked for an average of $7,000 less per year than their male counterparts (multiply that over 20 or 30 years) during job interviews. The repercussions of this chasm are extreme for the independent prospects of women. First, if hired, women are starting off at a lower salary, which means they have less money in the short term, which results in less money to put away for the future. But here’s where it compounds: from Day 1, not only is less money going into the retirement account, but when the time arrives to negotiate a raise, women are typically beginning the process from a position of catch up. Lastly, a business-culture issue is that many employers will devalue employees who appear to be devaluing themselves. In her book, “Wicked Success is Inside Every Woman,” author Vickie Milazzo said, “When I’m hiring, I actually weed out candidates who underprice themselves because I assume they won’t perform at the level I expect.” What other factors contribute to difficult retirements for women? Studies have shown that not only do working women wait longer to invest their money than men, but when they do start to save they are actually more conservative investors. This of course means the potential loss of years of compounding interest and savings. Consider that just in simple interest alone, a 5% return on $200,000 is $100,000 over ten years. 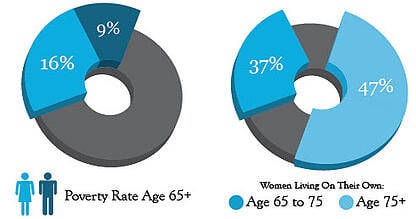 Lastly, but not least importantly, women’s healthcare costs throughout retirement are typically higher than men’s. According to a June 2014 article in Investopedia, women not only average almost $2,000 more a year in healthcare expenditures, but are 20% more likely to visit the ER in any given year than are men over the age of 65. To put this into the context of savings, when compared to men, that’s 40,000 additional dollars that women are likely to need during a 20-year retirement.

What working women need to do

While there are no quick fixes, because retirement preparation is a marathon and not a sprint, there are solutions.

The first thing every working woman should do is to identify what retirement plans their employer has. Utilizing your employer’s 401k means that with pretax withdrawals (the money is taken out before taxes), that bite out of your check will be less substantial than you might believe. Here’s an example: a $42,000 yearly salary equates to a pretax check amount of roughly $1750.00 every two weeks. Earmarking $50 before taxes actually lowers taxable income. If the employer has a “match,” this means that you can place 3% of your income ($52 every two weeks), and your employer will also place $52 into your 401(k). Once you’re vested, based on plan specifics, half of this money is free, and it equates to $104 every two weeks, or about $2500 in savings, just in the first year alone.

Negotiate. At one time or another, most of us have left money on the negotiating table. Learning to ask for a higher salary at work takes skill and a clearly-defined goal. Merely wanting more money for the sake of spending power isn’t enough. The next time you are interviewing for a position—or negotiating a raise—use something substantial as your motivation. If you work hard and you feel you deserve more, then become determined that what you really need is more money to prepare for retirement. 10 or 20 years from now, that extra $3,000 or $10,000 a year, saved and invested consistently, could be the difference between enjoying life and just barely getting by.

Establish written investment goals that are realistic, measurable and prioritized. Start identifying achievable goals if you’re a veteran saver, or simply start saving if you’re new to the retirement preparation arena. Moving the needle forward in a meaningful way is often no more difficult than making your goals official by writing them down. Because even if you’ve been maxing out your 401(k) for years, it’s very likely you haven’t actually identified precisely what it is that you want from your retirement.

Believe in the future. One of the most common mistakes working women make is to believe that either they can’t afford to save, or that, because they are already in the 40s, or even 50s, it’s too late to start. It’s easy to think, well, I’m late to the party, and now even if I save X number of dollars, by the time I want to retire I’ll only have $60,000 so why bother? That’s a mistake. First, saving begets saving. It’s an odd quirk in our makeup, but the people who report the highest satisfaction levels across the Western World aren’t the wealthiest individuals. The happiest, healthiest people are the ones who consistently save at least some money each and every month (even if they are poor by many standards). Once you see your balance grow, you’ll find more money to put away. Then there’s the small miracle of compound interest. With smart, careful, consistent investing, your money will grow more quickly than you might realize.

What married women need to do

There are still a lot of women who leave the responsibility for control of the finances to their spouse. This includes not being certain of the protocol should the worst happen and the spouse suddenly dies. Does your husband or spouse have a will? According to a July 13th, 2013, article in Investopedia, 55% of married couples still have not created this important legal document.

While certainly some couples are comfortable having open conversations about finances, and what needs to happen in the event of death, most of us just want to avoid the topic altogether. This is a huge mistake. Being unprepared only compounds the hardship when the unexpected eventually happens. And that leaves unprepared women (and their children) vulnerable.

"Social Security remains a retirement staple that needs to be understood because there is no"one size fits all," avenue for collecting benefits, and because those benefits are subject to change in the future."

What else is there to consider?

While this topic is fraught with emotional and legal complexities, and comprised of more variables than could be covered here, there are some basics that every married person should be aware of. First, whether retired, or not, if the person who handles the finances (or is the main income earner) dies unexpectedly, the first thing the surviving spouse must do is brace for an onslaught of people looking for money. While not pleasant to consider, be it scams (fake bill collectors), or even friends or acquaintances looking for loans, the combination of chaos and the potential for a big score brings opportunists out of the woodwork. They are asking for money at an emotional time when thinking is unclear and we are at our most vulnerable. This is why planning is key. In the event of the death of a spouse, you should have established protocols in place that require you to have to make no major financial decisions for at least a month.

Does your spouse have a pension?

If your partner had a pension, you need to know if they took a lump-sum payout, a monthly payout based on life expectancy, or a “joint and survivor” benefit option that pays you for the rest of your life. If you aren’t certain which your spouse chose, the company or your investment advisor will be able to tell you. But here’s the key: communicate about this before you’re forced to.

Know about your options for your spouse’s Social Security.

The venerable program is in a constant state of flux, with complex laws and the omnipresent threat of cuts making for juicy late night talk-show fodder. Social Security remains a retirement staple that needs to be understood because there is no “one size fits all” avenue for collecting benefits, and because those benefits are subject to change in the future.

Meet with an advisor.

Whether you are married, divorced, widowed or single, one of the least understood aspects of professional investment guidance has to do with working with someone who can take the emotion out of the management of your finances. This means selecting an advisor with a fiduciary responsibility who must make recommendations that are in your best interests, and not his or hers. There is a wide discrepancy between what stockbrokers, bank advisors, independent investment advisors like Hanson McClain Advisors, and insurance salespeople can do, and why, and what their motivation and responsibilities to you, the consumer, are. Finding out the differences and selecting a credentialed professional could well be the difference between flirting with poverty and having the opportunity to enjoy that spectacular sunset later on in life.